We survived! What’s more we enjoyed it and would even do it again!!!!

As always we were running around like headless chickens prior to their arrival and continued in the same mode more or less the whole time they were here but although it was fairly tiring it was also rewarding and we had a good time. Now we have to get back into work mode and it’s proving difficult. Just a little decompression time is needed I feel.

So to the trip..The first half of the group arrived at Tesoro Verde (we used the name for them to see how it felt) early afternoon Thurs the 8th. Steve had taken Heather’s advice and they all stayed in the city the night before since their flight landed after 9 o’clock and would have had only a few hours sleep before half of them needed to be roused for their visit to Barro Colorado. As it was, it was apparently still a struggle to make it to the dock at Gamboa for the 8 am pickup even though they only had to travel from the Radisson. Since Barro Colorado could not handle them all the same day, half of the group was able to sleep a little longer and they were the ones that arrived first on the Thursday. Poor Steve, who drove them through, then had to retrace his steps with the mini van to pick up the other half and bring them through some hours later. We arranged a BBQ that night and they went to bed sweaty and tired but at least well fed! Following day the group who made it through first, headed back to Barro Colorado and Heather went with them to help Steve with shopping. Meantime the first class was taking place underneath a tarp (for shade). Poetry!

And so it continued, visits to Portobelo and the Miraflores locks, the International School, interspersed with lessons amongst the palm trees and jungle scenery. As we were to learn, this was the school’s first international trip and given that they were coming from high country in May the heat was a major hurdle. The kids coped very well and there was very little moaning. We found out later that counter to our guesses their usual fare on field trips was rather basic so our (in our opinion) modest menu planning met with approval. “wow, no-one ever warmed the tortilla’s for burritos before!” With this discovery Heather and I could relax a bit. The only problem diet issue  was a very bright boy called Florian who was unable to eat gluten.  I felt sorry for him when the others where enjoying some freshly-baked bread but he appeared to be resigned to his fate and had fun making “pizzas” by loading a corn tortilla with sauce etc and popping them in the oven the night we ate Italian-style down by the wood-fired mud oven. Everyone else was happy with our arrangements and didn’t even complain when faced with the schools regularly occurring lunch plan of crackers with peanut butter and jelly. Good grief, we ate better over open fires at Scout Camp!!

Our fears over our water supply on the hill sadly turned out to be justified. It took only two days to run our tank dry, so science teacher Nate not wishing to miss a lesson opportunity took the whole group to the tank where they proceeded to work out what the meagre flow rate related to in terms of gallons per day. Or showers per day if you prefer. Thus was born the one minute shower rule! It stood us in good stead for the trip to San Blas.

This was the part of the trip with we were most apprehensive about. Not only had we never made the trip from Miramar to the lslands before but we had never worked with the lanchero Alexi before either. He had messed us about with the price just before the group arrived so he was not high on our Christmas list when we arrived at the dock to load the gear. However he was there and at least one of the two other lanchas was there also. So while we waited for other boat to arrive we donned life jackets and packed all the backpacks etc into Alexi’s lancha. Then the heavens opened. And stayed open full bore for about an hour and a half. By this time the other lancha had arrived so we squelched aboard, ten to a boat, and set off along the coast in water made dirty from the river’s outflow. The overcast day steadily improved and it was starting to get sunny when we checked into Porvenir and by the time we got to Tortuga Island (BBQ Island as was) it was as  beautiful a day as you could wish for. Principal Taylor was blown away. He really seemed to be struck dumb for a while as the reality of what he had been promised sunk in. The kids were in the water in a flash and the deal was done. San Blas had worked it’s magic. Anyone who has ever been to Kuna Yala  will certainly remember their first sight and watching the smiles we were taken back to our first landfall in ’99.

Of course that heavy rain was the beginning of rainy season on our coast and the following days were a mixture of sun and sullen showers. We got soaked on the Wednesday night and didn’t sleep too well but it made the porridge we ate for breakfast the next morning taste good. The lessons continued and included a raft building morning spent on Bug Island after the entire party swam the channel from Tortuga. The raft then provided wood for the bonfire that night. Heather and I pretty much took over the cooking even though it was supposed to be largely done by the kids. I felt they could do with the extra time to enjoy the island and we enjoy cooking. There was a bit of hunting and gathering with conch being prepared with coconut milk and garlic and lots of snorkeling which for most was their first experience of seeing a coral reef. We played football and volleyball with the Kuna who were kind enough not to try too hard. There was a preformance circle on the Thursday night with poetry, dance, sketches and readings. The standard was extremely impressive.  On Friday morning bang on ten Alexi and the others arrived at the island. I was speechless. To the minute, in Panama,in San Blas. Amazing! However within half an hour the skies opened once more and the islands disappeared. I was glad I had our hand held GPS because the lancheros had no idea of where we were once their landmarks were gone. Through the pouring rain we ploughed, Go Pro’s recording seas flattened by the rain until Porvenir appeared out of the gloom. Once again the weather cleared and we arrived back at Miramar without any problems. Actually we had the waves behind us and occasionally we were surfing down the back of them. Over 20 knots a couple of times!

Back on the land the tents were pitched for the last time and most of us headed for bed after supper. I was tired. Saturday was the last day for us since they had decided to spend the night before their flight in the city at the Riande. I ran the treasure hunt which went down well and then we all went to Don Q’s for an early dinner. A few group photos in the car park, hugs all round and then we went our separate ways. We have heard that they all made it back safely although I don’t know how many turned up to school on Monday morning. Three flights and a bus ride getting home around midnight doesn’t make for very happy kids the next day!

We must have enjoyed the experience since we haven’t stopped talking about what a great bunch of kids they were since they left. Even if it’s not the best paid job in the world working with kids and their teachers is pretty interesting and definitely leaves you feeling like you have done something worthwhile. 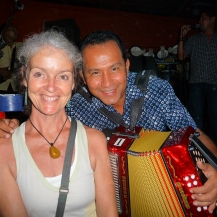 Nighttime cocktails in the panamaze 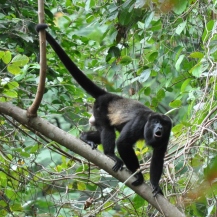 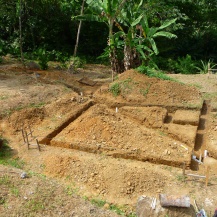 Can you feel the heat? 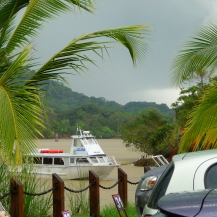 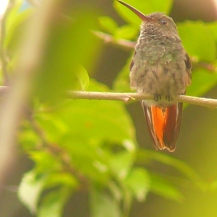 The first layer of clay goes on 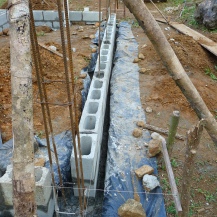 Steel and concrete! Where’s the bamboo? 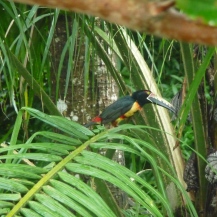 An Aricari. The toucan’s cousin 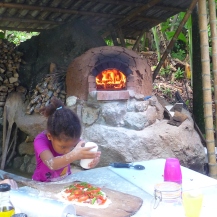 Careful with the garlic!

Jewel frog near the naked pool 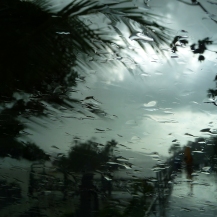 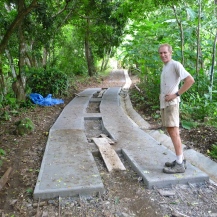 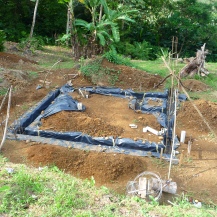 Wrapping the foundations in case they get cold.